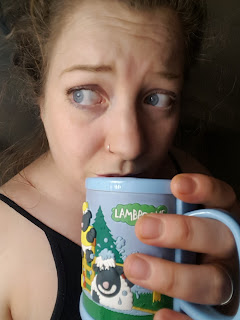 I thought my luck was in.... there being a distinct geographical anomaly of the GPS Reg-tracker of the Facebook to TripAdvisor continuum. Enough to have thought the stars may be shining on me and that he could have another bar 2 streets away. Wishful thinking but spurred on by the thought of a strong wifi connection AND baked beans for Small, I set off. He did reply to my message, and Facebook post, and friend's email. I shall put le grand opening in my diary, for 83 days' time. Good old Reg.

But all was not lost! Hark! English people in the hotel! I lurked over the neighbouring table like a vulture circling over it’s next dying meal, spotting a gap I put my big girl pants on- ‘are you English?’

They are. And are visiting a relative for Christmas and eating in the restaurant for the night and about as sympathetic as. Bet they’re Brexiteers. But Christmas songs are playing, there’s the fancy table clothes laid out, maybe they’re ramping it up for the Big Day, and I’ve just been whining incessantly for no reason?!

The next couple, lounging by the burning log fire (was that even there yesterday?) I spot them a mile off, snowman deelyboppers signalling their British-ness to even the dullest penny in the pocket. ‘Where is there to go at this time of year?’
‘Oh, you’re staying here for Christmas, I’m sorry. He states with the downbeat apologetic face that only a shit friend would pull upon her mate meeting quite the munter on a blind date. More locals. I’m doomed.

I thought I was onto a winner. They’d even filled up the water fountains glazing the perimeter of the hotel entrance, bubbling jets a visual synonym for my anticipation that in the morning the spa would be lit like a Christmas tree, and I'd be splashing away with Small in that indoor pool, vague memories of something from a horror movie fading quicker than the speed of light.

But nope. So I’m drinking gin. Because there’s literally fuck all else to do.


And that smell of shite I can’t seem to shake? No, the stress of this little comedy of errors has not made me fecally incontinent, it’s the sling. A perfect line that any artist would be proud of, right up the back of Small’s sling. That I’ve just scrubbed with complementary shampoo and a babywipe. A £100 sling. The wanky middle class mum within me has just died, aka tinkerbell in Neverland.

A third round the world: sticking pins in my eyes

October 22, 2022
You'd be forgiven for thinking that in paying a small fortune to pamper her, that I might have placated [bribed] for some decent frolics in anticipation of over 24hrs of being on the move. Fools.  (That was fine as it goes, for the first 2hrs at least, after hissing my way through security) however- It wasn't her this time. When did she stop frothing at the chops over a mispronounced kids tv character and start reminding me "you've only yourself to answer to mummy, when you think about it properly"? When? ...  Never will I ever get cross at Small for saying "are we there yet?". My arse is on fire, my back is grim and we're not even halfway there yet. Fuck you, Putin.  I've been up since 3am and I'm yet to get comfortable. It's not the plane, that's stunning and perfectly equipped comfort wise for what you'd expect in economy travelling a third turn rouund the world. It's me.   Pressure areas checked a
Post a Comment
Read more