Day 7: We made it! (And nobody needed to bail me out!) Honorary adulting badge awarded to Yours Truly. Fnar fnar

December 27, 2017
Done good with the colourful little rainbow today. But I've saved the mush for my Facebook page, I refuse to soften my corners here too!

She got Paw Patrol. In Turkish, but the effect is the same, ergo a less pissed off toddler than full blown angry potential. 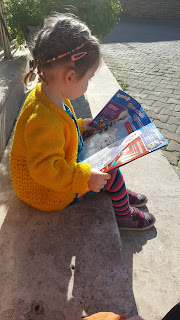 We've been to a private beach today. Well, it is Icmeler beach, though no locals are dumb enough to frequent with an absence of woolley hat (I've got a Freudian predictive text), duffel coat and hiking boots, let alone Small in just a dress and bare feet. Having said that we had a full on sweat on, it's been positively hot. I'd say it got to 16c, that's my ginger soul fucked, essentially. I was practically a kofta by the time we were dipping our cankles beyond the shillies. 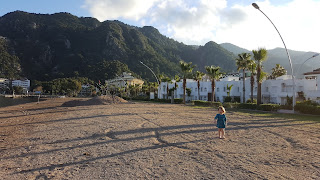 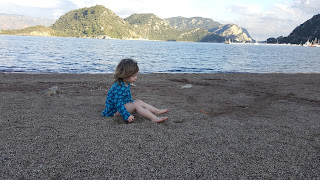 This was preceded by a lovely mystery bus tour through the middle of nowhere - I.e. the main town- looking for our Dutch friend, hospitable as always and fascinating to chat with, then visiting a really wanky biker cafe run/owned (?) by a hairy MCC biker (wearing skechers- we'll forgive him this faux pas as we all look a twat from the ankle down whilst on shifts, gots to protect those tootsies!) Aaaaaaand I had Turkey's version of Sheffield Porter, because why not. 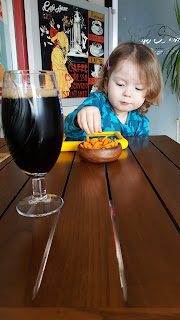 She was down with the bus. In fact, had I not have been such a panicky bollocks and discovered Icmeler prior I'd have been on it all week. But you learn. It was a kinda grab and run before the Dolmus sets off again jobby. And we didn't end up on the moon either, win! It's so off-season it's lycra disco flares at a [fancy] wedding and Small and I stuck out like a sore thumb. 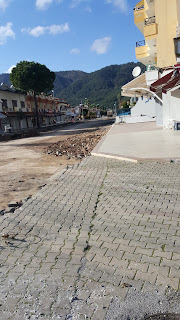 We even had a beautiful moment where a local-The one we saw- walked past and smiled stating some endearment and pointing to his mouth. I quickly reply with a universal unilingual acknowledgement somewhere between oblivious humour and knowing he just announced 'Your kid's an annoying shite and making far too much noise for us sleeping locals now piss off back to Benidorm'. We saw one child, who we surreptitiously followed in a rather distasteful fashion to figure out if she knew the wah into the heavily-gated playground we'd spotted passing on the Dolmus. It was awesome. Like a free outdoor Eureka without the E-Coli and Rotavirus encrusted Lego brick displays (which I shall revisit regardless in light of the year passes and put it down as an immunological opportunity) and just a shame we were turfed out slightly earlier than closing time by a Turkish Barbie sort brandishing keys, whose Ken had arrived on his scooter-charity to whisk her away. She was probably wearing crotchless pants or something and he'd arrived early on a promise. 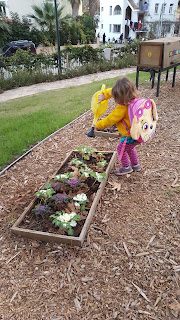 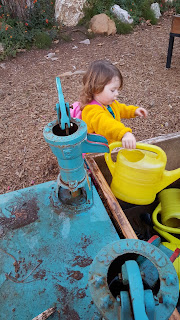 Quick heave ho and I do what no toddler owner should ever do; I went straight from day to night. No nap. No point in going back to the hotel for 30 mins by the time we got the right bus back. I was on borrowed time as was on the basis that she'd gone backwards on the micturition front before we even got the the beach, I thought 'Fuck it, we're both still alive after what is a magnified version of what you've been like since day 1, what's the worst that can happen?' 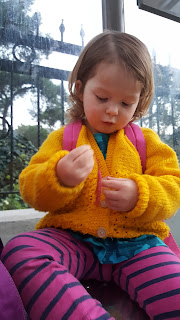 I'm sorry to disappoint, it was amazing. And I didn't fuck a single thing up! Only took me a week. Granted I had the best pie I think I've ever eaten- and that's on a fat bird's recommendations- that I regret not seeking out sooner, but it was so chilled. Essentially a table full of expats and dickhead who booked the wrong holiday. And a kid with a tablet. The holiday grail of parenting.

And she loves Hennie, insisting he and her acquired but not yet returned umbrella return to the bus stop with no further ado.

On reflection, there being knob-all to do has actually reinforced the making of our own fun, out adventures haven't been branded by 2for1 flyers or battery-powered migraine triggers.
We've had to play hide and seek and walk miles farther than we would normally have.
Going in winter I've not come back with heatstroke or had to worry about her falling out over the one patch of virginal sand, she's had the beach, the village and the run of the world for a whole week. 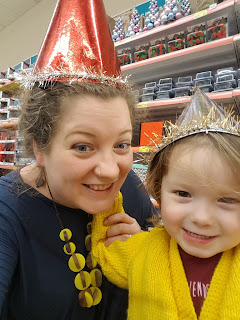 Granted, she may after all that just have wanted to have been left well and truly alone to watch 7 days' solid of our dear canine friends, twitching over too many selection boxes and in a pissy puddle of her unfaltering attention. But I brought her away regardless, and for fear of losing 90% of the full balance paid, it wasn't actually that bad.

And on that note I'm Zen-ned the fuck out now so gonna roll into bed. It's 2.20am here right now and my god that journey home is going to be a bitch tomorrow regardless.

Night all, and thank you for all making it through alive! (Or peeling your eyes out) please feel free to leave comments.