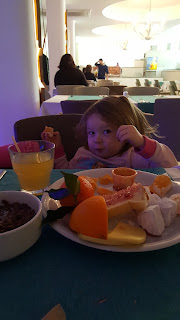 What other day can you justify spending the whole day in pyjamas? We've gone full on British with it today, cue odd looks from a hotel full of conference attendees (a conference, on Christmas Day?!) in the restaurant, which is getting far more luxurious looking by the day.

There’s a distinct increase in the food which cannot be named, but I’m uncertain if its for the benefit of the Tits-and-Teeth and Suits clicking and murmuring in disgust at Small as she's quite vocally rejecting anything to eat. My new game, meet the shameful stares of the ‘my-child-would-never-do-thats’ with the same unabashed defiance of the toddler that so disturbs the enjoyment of their carefully portioned continentals, so as not to stain their perfect pearly whites or set them off-balance from their skyscraper Carvellas. It’s rather effective, may try this back at home.

The electric piano is adorned with executive looking flyers (still disconnected) and we pile through the hoards of First-class scowlers to return the Benidorm-mobile key, still in our PJs, of course.

Small’s proclamation of ‘not again, silly mummy’ concretes the resolution that  we'll just walk from now on, as she sees our 5mph steed of yesterday and proceeds to pull me away. 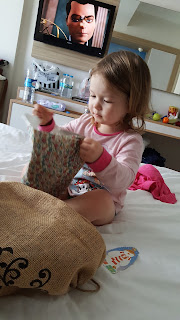 Back to the room to see what Santa has left for us. Only taking a few light things made this a real mixed bag. But in a nutshell, it looks like Nickelodeon has thrown up on Small, who is now top to toe in Paw Patrol, as I’m sure every other toddler owner's spawn is today. Gonna have a lot of shit to Shpock when this phase is over. 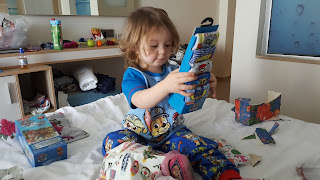 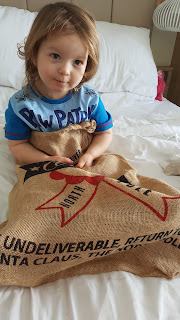 The hangover is kicking in by this point, I’m questioning the ethics of hair of the dog in charge of a Small. Maybe I’ll wait until after noon (technically 9am Barntown side, is that still wrong?). I’m loving the bouncing on the bed with joy kid, you always know just what mummy needs (vom). I remember I ran out of tonic last night, mixing with some local apple juice concoction instead, sending me to a horrifically dizzying sober-ish dash to the porcelain throne. Full stomach and gin and syrup mixer. She knew exactly what I needed then, innocently presenting me with 3 bottles of varying sizes of water. Darn it she’s too cute sometimes. My argument to the Captain Clipboards of the world stunning my parenting methods  would be to challenge them to do a week here. Zero fucks given, and we're both alive and happy still so jog on sunshine.

The idiots next door had nothing to say to me this morning, although their professional opinions of my parenting (being-why is your child crying and shouting all the time? Have you ever tried to wake a Small person from a mis-timed nap?) leave me with little festive compassion, and gauging from their self obsessed egocentrism at breakfast as they Insta-selfie their walk round the delights available, they’re got capacity of a gnat's arsehole to understand real humans. Especially ones that have re-spawned. So we casually pretend they’re dead as we walk past. I fear this hangover has turned me in Victor Meldrew.

I get giddy over the prospect of some culinary festivities for lunch. The crackers we'll pull, the cranberry sauce and miniature prawn vol-au-vents. The festive soundtrack that has looped for the past 3 days (at various decibels depending on how creepy the atmosphere deemed necessary) is cranked up. This is it. I can feel my stomach juices flowing like the Ganges in anticipation. 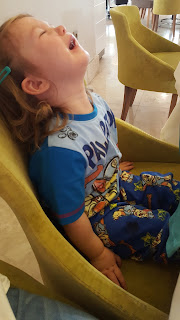 My gastric woes match the face of the Small, repulsed by her choices (all perfectly palatable, she was just being a twat). The closest I found was baked chicken. In a sort of chilled gravy sauce (after concentrating hard to not throw up, not 100% due to the hangover). All that was missing was the packet of Jell-O and I’d have been in a gelatinous haven of flavoursome festivity. At least I could have dressed in some charity shop flares and gone all disco-fever on it. That would've suitably pissed the Suits off. I make the best of a bad situation and chuck some yoghurt and oregano over it.

Right, no more Benidorm-mobile bollocks today, so gotta find something to do with Small that doesn’t involve getting stranded, we head to see if the lights are indeed on in the pool now. They are, though I’m pretty convinced that Vaughn Monroe and Judy Garland still sound eerie down in this basement, only with an ambient blue backdrop to what feels like an imminent murder scene. 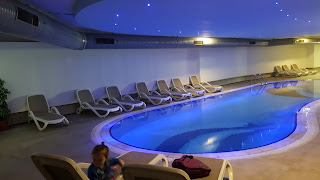 I’m still filled with unease at the far end of the pool, with the same instinctive cortisol/adrenaline rush one is usually conditioned with experiencing when spotting a gigantic hole above ones head leading to a mould ridden abyss. It doesn’t shake away much later. I’m sure there’s something in the Not-wife’s DSM5 about getting ones twat in a tangle over fuck all and tricks of the mind. 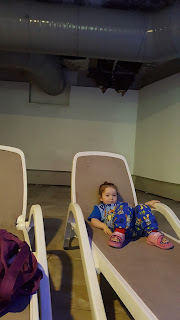 Donning a floatie and very little fear Small and I get cracking. Safety first, see which is the shallow end, there isn’t one, bollocks. Clinging onto her hand I get in first, run out of steps and I’m half jiving half, drowning looking for the bottom. Shit, it’s up to my ears if I stand flat. Maybe I was seeing things to come the other day, I’m like Nostra-fucking-Damus.

In the time that it took for us both to look like Leonardo DiCaprio’s lower torso by the end credits, Small has metamorphosed from a writhing fairy at the slightest drop of water above her shoulders, to full-on doggy-paddling solo a good 5m length, numerous times. The kid who I’ve not yet taken to swimming lessons, and has been in a pool no more times than I could count on one hand, fucking proud mama moment. Which is amazing really, and rather lucky as I’m sure there'd be a disaster should I need to rescue her.


Quick visit to McDs to ensure child doesn’t become ketotic by the morning (that AND rickets would be far too difficult to explain to the Health visitors at the next visit), in our pyjamas still (there was a brief interlude where I had on my spanking ‘Trample the Patriarchy’ tee -cheers Phoebs- but took it off for fear of Small ruining it with rage). Quick bit of Christmas TV and she’s flaked out. Helena Bonham Carter as a fairy godmother, that’s a new one. 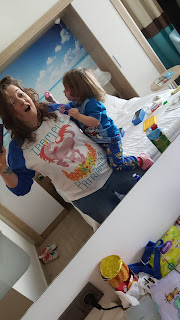 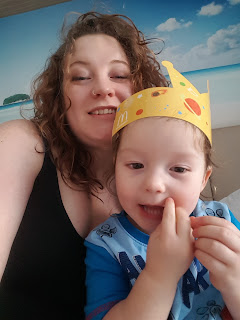 Got left a personal message earlier stating that Hennie has invited me to the Taj Mahal for dinner, why the feck not. I’m not hanging out for that figgy pudding, and knowing Jaynie’s having the same, it’s almost like we're sat being gastrically dysfunctional together.

Merry Christmas everyone,
Pinky and the Brain
Xx