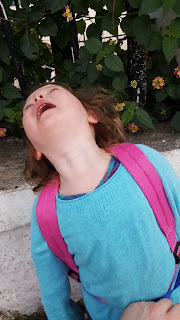 Beige.
The walk of shame.

Every single colour under the sun, that kid’s plate was like a rainbow. Textures, aromas, the lot. It was like tapas without the tequila and quartet. Nada, niente, zero. Still, I think, there are another 2 meals today left, all is not lost.

My salad (yes, salad!) goes untouched in favour of disentangling the tiny tornado from another pickle of wills.

My god, Paw Patrol stopped working on the kindle, in fact all the videos did. I’m usually rather au fait with this kind of stuff (excusing the deconstructed Dell and a rather abused boombox of yore) but I give up. Apps it is. Though the time this took to admit defeat and plan to do something for the morning ran well into the hour and by the time I was strapping on the bumbag (yes, I’ll get to that later) Small was yomping away on the yayas and my window of opportunity had passed. But at least it was quiet. I decide against a G&T thinking I’ll save myself for dinner- famous last words.

Post nap, and post Google for what the heck to do with a Small in a cold holiday resort off-season, we set off armed with a screenshot of the way to an all-bells-on cafe-cum soft play place.
Ten minutes in I’m thinking this can’t be the way to the centre of the resort. Great observational opportunity to brush up on my building skills but not much in the way of child friendly things.

Then I see it, an oasis of parenting heaven, shining on the distance a playground. Happy, smiling, tiny person. All is well until she shits.

I figure we're more than nearly there so we plod on with the faint promise of finding a public loo. Or at least an ice cream, to soften the blow of  a potential angry rash to match the owner.
20 minutes later, she’s waddling like some millennial rapper with an expression not too dissimilar. Only now she’s mad. Mad that I insist that she holds my hand, and even more so when I resort to the lead of shame when this approach fails spectacularly. We’ve given up on the soft play area, nothing but diggers and crates of bricks as far as the eye can see. Mum skills over and out.

We walk past Bulldog bars, English all you can buffets, 24/7 Kebab World, even a ‘Yates's’(I forgive the poor grammar as an international oversight) and even shudder at the thought of yet another McDonalds in the distance but my gastric woes are untold, they’re all shut. Do the locals not want kebab 24/7 I ponder?

The first open cafe and it’s straight to resolve the colonic irrigation that is the romance starring Senior Dulcolax and his leading lady Mrs Movicol. The kiddy Kindle comes out. My word that’s a fun plaster to rip once the coffee has gone cold. Into the sling and we find a lovely shopping centre. Toys and shoes and myriad wonderful things that I've no chance of looking at in my current predicament. But it’s nice to get inside for a while, out of the rain. Her coordination is improving, she’s able to manage to retain the pink balloon she wailed for dramatically by holding both hands as the feeble stick bends like the sinking titanic in the wind, as we visit the beach. Kudos, kid!

Dinner: posh, wanky and far too fucking fancy for a Barnsley bird and her offspring. A la carte, great. Wanting to avoid a repeat of breakfast I ask for a little bit of everything for Small and kindly they acquiesce. She has other things in mind however, namely the bloody lollipop I’d forgotten about being in my bag.

Cue the biggest non-compliance of gastric proportions, resulting in my sucking (yes, as fancy a place as this is) the sauce off the blandest, most beige option on the menu. A short pissy protest mid meal and we’re at the finishing line. I scrub the chair and pretend like I’ve not seen the reason why the next business man to come on his business trip will smell like a tower block stairwell (this isn’t the kind of place that your Thelmas with their Tena lady patronize, so can’t blame them). No chance of slipping that ‘water’ into a glass of tonic here. Bought my own.

I daresay that the closest laundrette is a billion miles away, I mean c'mon, if I’m not getting a 24/7 kebab I’m sure as hell not getting Small’s knickers dry cleaned outside of the extortionate price-per-item hotel service.

So I’ve succumbed. I’m going to pay to rent the tv for a week. And will sit outside in reflection over what will be unequivocally my sharpest decision to date, watching the ghost-town at rest. In a jumper.

Phil Collins would most definitely have something to say about the weather, I’ll be surprised if I don’t come to regret not packing those wellies.

She’s having a whale of a time however, so that’s all that matters!

Jemma and the tiny Tornado
X